Below you will find the CryptoLab VPN installation instructions and some additional documentation. Let’s remember that this service is set up to allow us to fly under the radar. To not be apart of a larger VPN company where your IP address is known to be a VPN. Let’s NOT use this service for file sharing, movie sharing and other legal and not so legal things that would get us flagged and our IP reputation placed on a fraud list. Here is a simple example – https://scamalytics.com/ip/139.177.181.123

Once you’ve purchased your CryptoLab VPN Service you will be able to visit the downloads page to retrieve your VPN configuration files. Use these files to set up each individual VPN connection. You will be issued 10 VPN* connections for each VPN connection city. You can mix and match which files you install on which computers or mobile devices.

0:10 In this video today, I'm going to go over the concepts and what you should understand about the VPN service that I...

Second, install WireGuard on the computer or mobile device you want to configure for a VPN connection.

Below you will find documentation on how to install your VPN on your computer or mobile device. Make sure to read through each device type you want to add.

The emailed folder will contain 10 connection files for each VPN connection city. You can use all 10 connections yourself or split it with your friends and family. The .conf files & .png files contain your user names and passwords. You never need to use your email address or an account name to log into a VPN. Below is an example of the files you’ll be receiving. 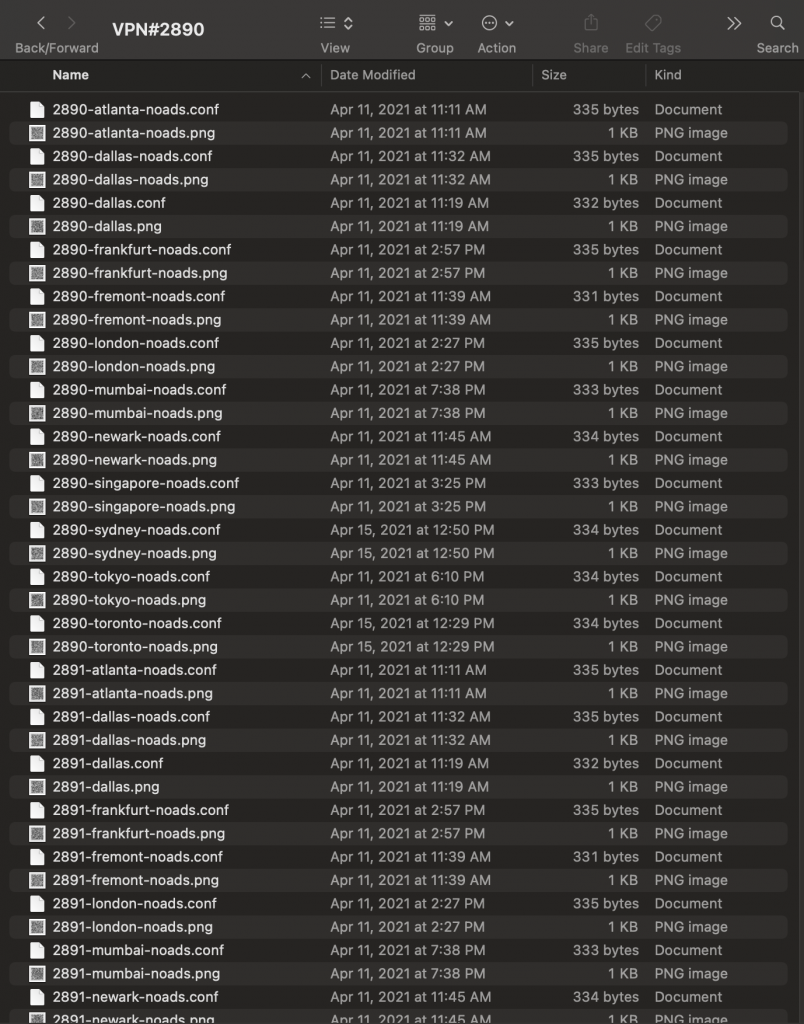 Using the example folder above:

Once you have used the 2890-atlanta-noads.conf OR 2890-atlanta-noads.png file, do not use them again on any other computer. I recommend that you delete them or move them to a folder labeled “Used”. Do not use either of these files on another device until you remove them from the original device. Once installed, a VPN connection will not need to be re-installed unless you delete the connection on WireGuard.

In the example above, I have named the files to associate with the VPN connection location. Let’s break down the file name:

Below are the locations of each VPN. You will see that all but the Dallas location have ad and malware blocking.

Why Would I Want To See Ads?

No one really wants to see ads. But sometimes you have to, to play the game, see the news or just visit a site. VPN connections are not perfect and they can be identified. There are times when websites show you content that might be blocked by ad-blocking technologies. To get around this, you can simply change your VPN connection to the Dallas location. The technology that we use to block ads is not like the ad blockers in your browser. The technology that we use is more in line with how a Pi-Hole works.